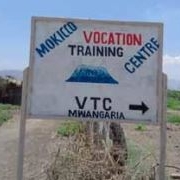 We post messages from Mokicco here to keep you informed of their developments.

I want to start by thanking you for all the gifts and prayers we received in October.

We can report several positive events this month.
Covid 19, which has caused a lot of suffering, is almost over. In our village Marangu we meet for the first time many tourists who have returned to climb Kilimanjaro. It means a lot financially to many here, especially those whose finances depend on tourism and the mountaineers.
The school year for primary school children is coming to an end. In Tanzania, we have the British school system, which means primary education lasts for seven years and most children start when they turn seven. Primary school ends for 27 children in MOKICCO this year. We believe and hope that many pass the exam and start high school in January. Those who do not qualify for secondary school can instead: study at the vocational school in Mwangaria, which is run by MOKICCO.

Another encouraging event was that MOKICCO received a volunteer who worked as a teacher at Ashira Primary School. She is a lawyer from the Netherlands who has taught English. She has lived at MOKICCO and accompanied the children to school. It has been a very good opportunity for the children to practice their English.
MOKICCO has a great need for volunteers, especially at the vocational school. Perhaps this was the beginning of more volunteers in the future.
My hope for the future is that children MOKICCO has helped move forward with success in life after their time with us. The situation looks promising!

Some of the kids are in college, others are studying music. In primary school we have a lot of students, and they are doing well in their studies. An example is this fifteen-year-old girl Ester who is in the second year of high school (Kibosho high school). She is ranked number one in a class of 92 students. Her parents, mother and father are alcoholics, so she falls under the care of Mokicco.
Let us pray for the children that they will eventually continue with MOKICCO. The need is great!