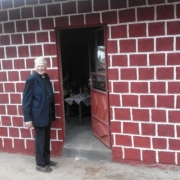 We receive messages from Mokicco from Carl-Erik and place them here to keep you informed of their developments.

I greet You all in the name of Jesus!

What has happened from the horizon of MOKICCO during the last month – February 15 to March 15?  Yes, my diary tells me that my book about George Müller is now published in translated into Finnish and published there. Müller is the man who has inspired us so much in our ministry – he had a hugh work among orphan children (around 2000) and he never asked people for money, he only trusted God.  So we also try to do.

More from this month: We have begun to sponsor a Lutheran evangelist teaching in primary school. We have had talks with the Moravian Church about a closer relation and cooperation. We have been asked to start up some work south of Arusha and in Mwanza. Our kindergarten in Kituri now ready to receive the children.

And then we inaugurated house nr 45. It was built for a handicapped man.  He is lying in his bed all the time, helped by his wife.  Now they have got a new house and it was a good day, the 7th of March, when I could open it.

From the month more private: I have sent away a manuscript to a “General Church History” (In Swedish) to be published in Sweden. Overa has translated a book from a Pakistanian refugee about the relations between Christians and Muslims. That book is now translated into Swahili and published.  Swedish Television sent a program about the work in the Church I served for 24 years, S:ta Clara. Two co-workers witnessed so strongly in the program. I guess that hundreds of thousands have watched that program.

Yes, God is so good, he is God and he is a specialist in doing miracles and giving surprises!

In Memoriam
Scroll to top